Narde is a popular version of backgammon and is played a lot in Russia. 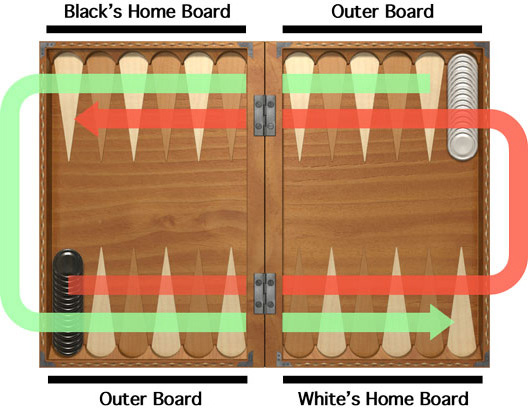 The uniqueness of this play style is in checker placement – along the left side of the board for every player. Checkers at their initial positions are called “head” or “home”.

You have to move all your checkers to your home board, and then bear them off from the board before your opponent. Movement of checkers is counter- clockwise for both players.

Narde starts differently from backgammon. Both players roll one dice and the player with the higher, rolls two dice to begin play.

Checkers move in the same way as backgammon but with one exception. You cannot land on, (hit), an opponent’s checker. You can only move a checker to an open position or one already occupied by you. Good play is to have your checkers on as many points as possible in order to restrict your opponents movement. If you have six consecutive positions occupied then your opponent cannot pass. This may result in your opponent being unable to move and losing a turn. This is an important part of game strategy. Important! It is forbidden to block ALL your opponents checkers. At least ONE checker has to be able to move.

There is no doubling cube in Narde. Points are awarded as follows. You get +1 point for every win and +2 points for gammon (if opponent hasn’t borne off any checkers).

Narde rules in “Backgammon Masters” are implemented according to rules of Russian Backgammon Association.