How to play Backgammon?

Backgammon is one of the oldest two player board games. Millions of people all over the world enjoy this wonderful game. Learn to play it as well! 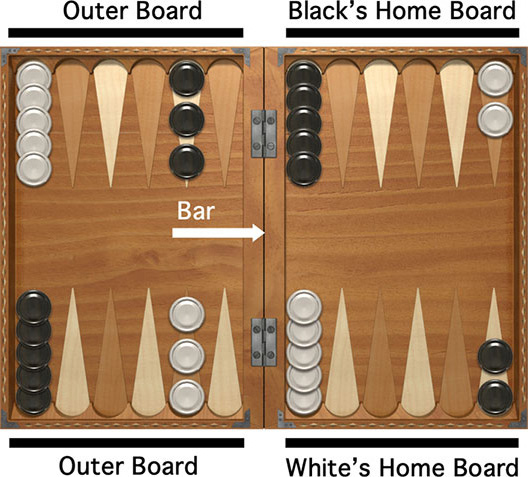 But you do not have to buy any of this as it is all already in our game!

The board is divided in four quarters, six points in each. The quarters are called – home, yard, opponent’s home and opponent’s yard. Home and yard are separated by the bar.

To determine who plays first, both players roll one dice. If the dice are the same, roll again. The player with the highest number goes first. 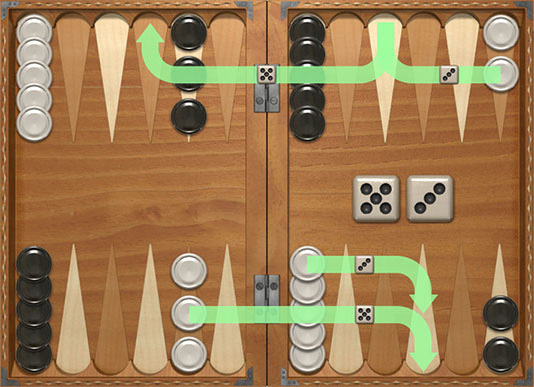 You have to move the checkers until all of them are at home. Then you have to bear the checkers off the board before your opponent does. The white checkers move counter-clockwise and the black ones – clockwise.

For example, if you rolled 3 with one dice and 5 with the other, then you can move any one of your checkers three times and another one five times. You can also move one checker eight times.

When you get an identical number of pips on both dice (double), you have to make 4 moves for the amount of pips on one dice.

If you have any hit checkers on the bar, you have to make a move with them first and then with the others. If you can not make a move with the checker on the bar, then you lose a turn. In backgammon you can place as many checkers as you like on one point. You can only place your checkers on the point if it is free or is already occupied by your checkers. If the point has one opponents checker on it, you can hit this checker.

If there is more than one checker on a point, then that checker is covered. Your opponent cannot take that point. If you are unable to move any checkers using the dice just rolled, you lose a turn. By covering six consecutive points, you can block your opponents progress. This type of play could give you an advantage and help you to win the game. You must move checkers according to the dice rolled even if you do not want to do so.You cannot skip a turn or shorten a move.

How to hit and return checkers?

Hit checkers are placed on the bar and are starting their moves from the beginning of the board. White checkers have to start from the 1st point and the black ones – from 24th. This is why the objective of each player is to hit opponent’s checkers, thus increasing the amount of necessary moves for victory.

For example, if your checker was hit and you got 6-4 pips on the dice roll, then you have to move to the fourth position. The dice 6 in this case loses, since the sixth position is taken by an opponent’s checker. 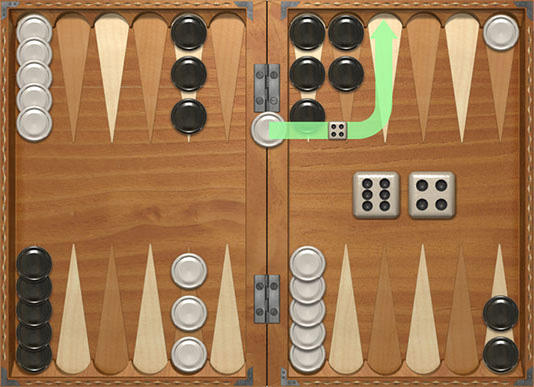 This is possible only when all of your checkers are at home. You can bear the checkers off only from points which numbers correspond to the pips on a dice roll. For example, if you get a dice roll of 5-3, you can bear off one checker from point 5 and one from point 3.

Bearing off checkers from a point which is of lesser value than pips rolled on the dice is only possible if these points have no checkers on them. For example, you get a dice roll of 6-4, but the point 6 has no checkers, then you can bear off one checker from the point 5 and one from point 4. 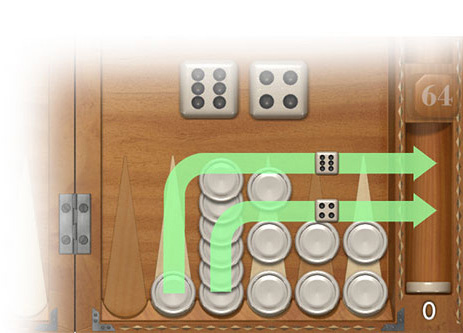 Each game begins with bet of one point. If a player feels like they are at an advantage they can offer to double the bet using the doubling cube. Players can double in the beginning of their turns before rolling the dice. If player who was offered to double declines then this player instantly loses one point. If the player accepts the game continues with doubled bets. The doubling can happen only in geometric progression (2-4-8-16 …). Player who accepted the double gains control over the doubling cube and can in turn double the bet once more.

If for any of the players it takes only 1 additional point to win the match the doubling does not apply. This s the Crawford rule. In the last games of this particular match players can double with no limitations.

Backgammon rules in “Backgammon Masters” are implemented according to rules of US Backgammon Federation.